Last week, Rachel Brosnahan of the award-winning Amazon Prime original series Marvelous Mrs. Maizel came to CHNY!  The actress came by our site to speak with young people currently staying at Covenant House and interview staff as well.  Rachel spent the day interacting with many different people whose roles are critical to the work we do at Covenant House.  Her own crew as well as some staff from CHNY’s parent, Covenant House International, recorded Mrs. Maizel’s presence at the Cov for promotional materials and other advocacy purposes to increase awareness of the work being done at Covenant House.

Rachel has won several prestigious awards for her work on Marvelous Mrs. Maizel: she won the Primetime Emmy Award for Outstanding Lead Actress in a comedy Series in 2018 and two consecutive Golden Globe awards for Best Actress for a Musical or Comedy Series in both 2018 and 2019. 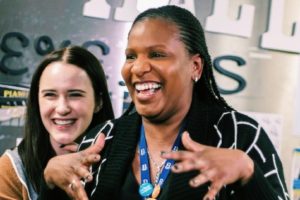